Fifth edition of The Naval War of 1812 by Theodore Roosevelt, printed in 1894.

Octavo, xxxviii, 549pp, [1], [2pp ads]. Publisher’s pebbled brown cloth, title in gilt on spine. Illustration of a fully rigged sailing vessel on cover. White endpapers. Faint rubbing to tips, light dampstain to corner of spine, no impact to text block. Stable text block, free of any marks or notations, even toning to leaves. (Cole & Vail, A3e) This fifth edition of Roosevelt’s first work was issued at $2.50 and is almost identical to the fourth edition. A scarce work.

Roosevelt began writing this book during his senior year at Harvard. He later noted that the first chapters he wrote at Harvard “…were so dry that they would have made a dictionary seem light reading by comparison.” Over the next two years, he refined this narrative and published the book at the age of 23. The first edition was issued in three types of cloth: dark blue, olive green and reddish-brown. Subsequent editions were printed using the same plates, but with “second edition, third edition, etc.” added to the title page. 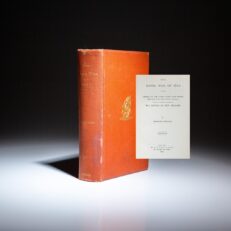