Naval Sketches Of The War In California

Signed by President Franklin D. Roosevelt for future Arizona Senator and Republican presidential candidate Barry Goldwater, the limited edition of Naval Sketches Of The War In California by The Grabhorn Press.

This copy is signed by President Franklin Roosevelt on the front free endpaper, with a note from his private secretary Missy LeHand on White House stationery, to Barry Goldwater, Esq., noting that “The President was very glad indeed to sign your copy of Naval Sketches.” Includes the bookplate of Margaret and Barry Goldwater on the front endpaper.

The original sketchbook of Gunner William H. Myers, U.S.N., was acquired by President Roosevelt in 1932 from a dealer in Hyde Park, after Roosevelt realized it’s “historic value” to the naval history of the War with Mexico in 1846-47. When Roosevelt was compelled to publish this “pictorial record” of the Mexican War in California, FDR convinced Random House of its importance, volunteered to supply an introduction, designated his personal secretary, Missy LeHand, as his liaison to the Grabhorn Press and persuaded Captain Dudley W. Knox (who had previously edited several volumes on naval history, for which FDR provided forewords) to write the text. ? 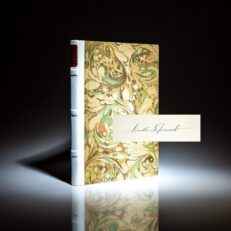