The Organization and Administration of the Union Army 1861 – 1865

First edition of The Organization and Administration of the Union Army by Professor Fred Albert Shannon.

Comments: This scarce Civil War work by Fred Shannon won the Pulitzer for History in 1929. It describes the evolution of the union army from a peacetime organization to an active military organization, the supply chain struggles and the hardship of the conversion. It is largely based on a paper written by Union Colonel Thomas Wentworth Higginson, where the author argues that no officers should have been appointed who were not West Point graduates. A reprint of this work was published in 1965. 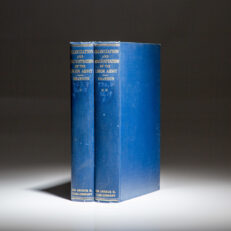