The “Bag Man” referenced in this inscription was I.H. “Bud” Hammerman, a Baltimore real estate developer, who accepted kickbacks from contractors and funneled the money to Spiro T. Agnew. The scheme began when Agnew was the Baltimore County Executive, continued when he became the Governor of Maryland in 1966 and escalated when he became Vice President in 1968. Public records show that Hammerman visited Agnew in Washington numerous times during his first year in office, delivering envelopes of cash at each occasion. The scheme fell apart in early 1972 when United States Attorney George Beall opened an investigation into corruption in Baltimore County, with whispers that Agnew may be involved. The story went public in 1973, with Agnew quickly losing support within the Nixon administration and ultimately resigning on October 10th. Hammerman became a cooperating witness and sentenced to 18-months in federal prison. 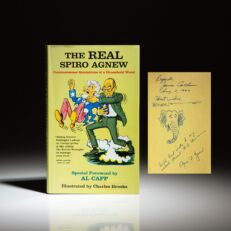