Octavo, 382pp. Blue hardcover, title on spine. First printing with full number line. In publisher’s near fine dust jacket. Inscribed on the title page: “To Karen and Craig – We were there together so many times — and so many times, you each were a source of strength, inspiration and friendship – David Gergen. 8/2000.” 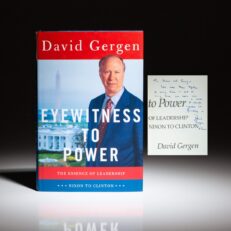