Octavo, 200pp. Blue leather, title embossed on cover. In publisher’s dust jacket, lightly worn, in very good condition. Inscribed by the author and photographer on the title page: “For Craig and Karen, who were totally involved / in two of my five administrations! If Craig appears / on page 129, how come no picture of Karen?? How did I / miss you in the Reagan years? All my best to you both, always, / Diana / Diana Walker / December 2002.” 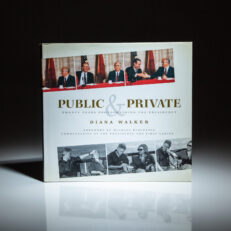