Signed limited edition of The Reivers: A Reminiscence by William Faulkner.

Octavo, [8], 305pp. Red cloth, title stamped in gilt on front cover and spine. Top edge dyed red. Slight lean to text block, a fine example. In the publisher’s acetate jacket, a touch of shelf wear, near fine. Signed by the author on the limitation page, number 349 of 500 copies.

William Faulkner (1897-1962) was a two-time Pulitzer Prize-winning author, recognized for A Fable in 1955 and The Reivers in 1963. The Sound and the Fury, As I Lay Dying, and Light in August were recognized by The Modern Library on their 1998 list of 100 Best English-language Novels of the 20th Century. Faulkner primarily set his stories in the American South, many of which took place in the fictional Yoknapatawpha County. The Reivers was the last novel written and released by Faulkner before his death in July 1962. 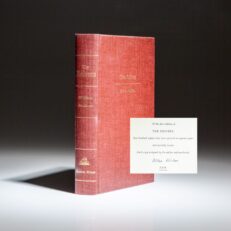