Octavo, 353pp. Black cloth, title in silver on spine and cover. Stated “First Edition” on copyright page. In publisher’s near fine dust jacket with illustration of the author on back panel, retail price $19.95 on front flap, vibrant colors. An attractive copy of this classic spy thriller by John le Carre.

David Cornwell (1931-2020) was a British author who wrote under the pen name of John le Carre. In 1961, while working for British intelligence, le Carre published his first novel, Call for the Dead. With his third novel, The Spy Who Came in from the Cold (1963), le Carre became an international best-selling author, and he soon began writing full-time. Many of le Carre’s works are spy novels set during the Cold War. Several were made into movies. The Russia House was made into an American film starring Sean Connery and Michelle Pfeiffer in 1990. In 2008, The Times of London included John le Carre on its list of “50 greatest British writers since 1945.” 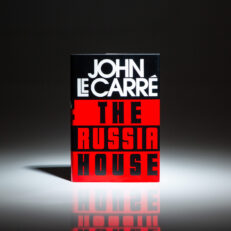