Octavo, 430pp. Blue cloth, title in gilt on spine and front cover. No additional printings mentioned. Slight lean to text block, toning and wear to edges. Gilt rubbed on spine and front cover. Complete with illustrated frontispiece, detailed illustrations, and portraits throughout text. Signed on verso of frontispiece: “To my good friends / This History of the gallant Regiment in which I had the honor to serve – is inscribed with the very best wishes of Geo. E. Albee / New Haven Conn. Sept. 24 – 1900.” (Nevins I: 52)

First Lieutenant George E. Albee received the Medal of Honor in 1894 for his service during the Apache Wars, which were fought between the U.S. Army and multiple Apache tribes in the southwest from 1849-1886. 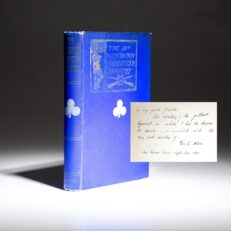