The Union of South Africa

Octavo, 192pp. Maroon cloth, title in gilt on spine and front cover. Solid text block, free of any marks or notable wear. In the publisher’s scarce gray paper dust jacket, retail price on spine, chip to top corner, toning to spine, a near fine example. Signed by Prime Minister Jan Smuts on the front free endpaper. A superb association copy from the 2nd Prime Minister of South Africa Jan Smuts and one of the leading architects in the formation of the Union of South Africa.

Field Marshal Jan Smuts (1870-1950) served as Prime Minister of the Union of South Africa from 1919-1924 and again from 1939-1948. He advocated for racial segregation early in his tenure, but altered his views after the Fagan Commission findings. He lost his seat in 1948 to hard-line nationalists who institutionalized apartheid. Smuts served in both World War I and World War II, and he was the only person to sign both the Treaty of Versailles and the United Nations Charter. In a 2004 poll, Smuts was named one of the Top Ten Greatest South Africans of all time. 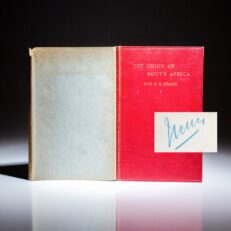