Octavo, x, [2pp], 636 pp. Red faux-leather covers, title in gilt on spine, initials and decorative band in gilt on cover. Cracking along hinges of cover. Cracking of cover is common with this limited edition. Internals are clean. This is a scarce limited edition printing, with 300 copies signed by President Johnson for supporters and members of his administration. This is number 154 of 300 signed copies. Additional inscription on dedication page: “To Cartha “Deke” DeLoach / a good friend – an efficient and conscientious public servant who gave all he had. Lyndon Johnson.”

Cartha DeLoach, known as Deke, was the deputy associate director of the FBI. He was the third most senior official at the FBI, after J. Edgar Hoover and Clyde Tolson. Shortly after the assassination of John Kennedy, President Johnson requested that DeLoach be assigned to the White House as an intermediary between himself and Hoover. Mr. DeLoach was considered a member of Johnson’s “inner circle,” with some historians believing that he provided Johnson with critical information on Barry Goldwater and Senator Robert Kennedy. Mr. DeLoach passed away in 2013. 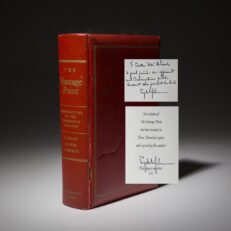