Octavo, 109pp. Green cloth, black leather spine, title in gilt on spine, gilt facsimile signature of Ford on front cover. Housed in publisher’s matching green cloth slipcase. Signed by President Ford on the half-title. From a limited edition of 50 copies, this being number 33. A fine example.

This publication was limited to 50 deluxe signed copies in quarter black leather, with a slipcase, and another 200 signed copies in full green cloth. Of the 50 deluxe leather-bound copies, President Ford, President Nixon and Mrs. Ford received copies. They were all signed by President Gerald Ford on the half-title. This address by Gerald Ford was given at Butte College in 1991. It addresses the War Powers Resolution (War Powers Act) which was enacted by Congress in 1973 over the veto of President Nixon. In reaction to wars like Vietnam and Korea, Congress passed a new law that required a president to seek a declaration of war by Congress before sending troops into combat. While this law has never been challenged in the Supreme Court, President Ford contended that it was unconstitutional and hindered the ability of the executive to defend the nation. President Clinton and President Bush both challenged the law with their actions in Kosovo and Iraq. 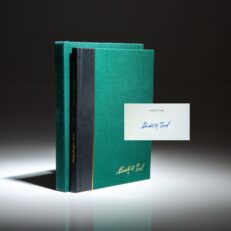 You're viewing: The War Powers Resolution: a Constitutional Crisis? $575.00
Add to cart