Octavo, [24 Volumes]. Publisher’s maroon cloth, title in gilt on spine. Faint sunning to spine, uniform across all 24 volumes. Top edge gilt, uncut edges. Decorative endpapers, free of any bookplates or ownership marks. From a limited edition of 1050, of which 1000 are for sale and 50 are for presentation by former First Lady Edith Kermit Roosevelt. This set is number 769 of 1050, signed by Edith Kermit Roosevelt on the limitation page.

Theodore Roosevelt served as the 26th President of the United States. He was a prolific author, writing more than 18 books during his lifetime, beginning with The Naval War of 1812 in 1882. His other notable works include The Winning of the West, African Game Trails, and The Rough Riders. This is a complete collection of all his writings, in 24 separate volumes, produced after his death in 1919. 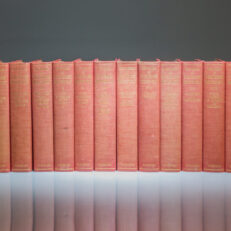 You're viewing: The Works of Theodore Roosevelt: Memorial Edition $2,200.00
Add to cart