Second printing of Theory and History: An Interpretation of Social and Economic Evolution, signed by the author, Ludwig von Mises.

Ludwig von Mises (1881-1973) was an Austrian economist, historian, and sociologist. He was a leading economist and social philosopher of the 20th century, writing extensively on the need for laissez-faire economic policies and free market economies. 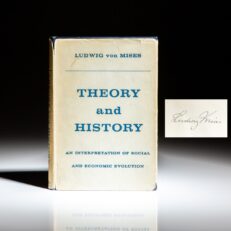