Octavo, [two volumes], xviii, 462pp; ix, [463]-987pp. Green cloth, title stamped in silver on spine. Significant underlining and marginalia in Volume I, clean text block in Volume II. Both volumes with solid binding, touch of wear from handling to Volume I. Both lacking dust jackets. This set is inscribed in Volume I: “To Jim Doenges: Yours, for liberty. Murray N. Rothbard. May, 1962.”

The publisher of this work censored the final eight chapters, fearing they were too radical for publication. They were eventually separately published in 1970 by the Institute for Humane Studies, under the title Power & Market: Government and the Economy. The deleted chapters were finally reunited into a complete work of Man, Economy, and State in 2004. Murray Rothbard (1926-1995) was an American economist, who was a leading theoretician of anarcho-capitalism and a prominent figure in the American libertarian movement. He founded the Center for Libertarian Studies in 1976 and co-founded the Mises Institute in Alabama in 1982. 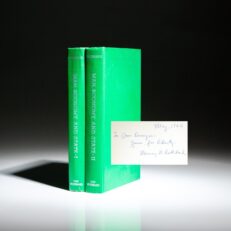