This Moment On Earth

First edition of This Moment on Earth, signed by John Kerry and his wife, Teresa Heinz Kerry.

John Kerry served as a United States Senator from the state of Massachusetts from 1985 until 2013, when he was asked to join the Obama administration as the 68th Secretary of State. In 2004, he ran against President George W. Bush for President of the United States. He fought in the Vietnam War, where he received the Silver Star, Bronze Star and three Purple Hearts. After the war, he became an outspoken critic of the war, launching his political career in the process. 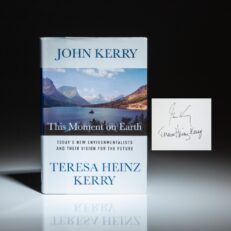