First edition of Threescore Years: An Autobiography, an early history of the Gold Rush era in California, by Samuel F. Holbrook.

Octavo, vi, [4], [11]-504pp. Publisher’s red cloth, title in gilt, illustration of Saladin in gilt on cover. Original cloth laid down and reinforced at spine. Includes frontispiece and 13 full-page illustrations of naval life. Even toning throughout, a few scholarly notes in pencil. Previous ownership inscriptions on the front endpapers and verso of frontispiece. (Sabin 32457) (Howes H576) (Howell, California 50: 524) (Wheat, Books of the California Gold Rush 102.) A scarce first edition, with only a handful of known copies appearing on the retail market.

Samuel Holbrook arrived in California in 1850, after a difficult journey over the Isthmus of Panama. His descriptions of early California detail the “worst and unromantic side of life in the state [but] are nevertheless interesting.” He wrote that “San Francisco was filled with gamblers, rogues of every species, cut throats, highway robbers, Sydney convicts, villainous commission merchants and bankers, fraudulent auctioneers, hypocrites, apologies for courts, and some of the most miserable and contemptible pettifoggers that could be scraped together from every section of the country.” 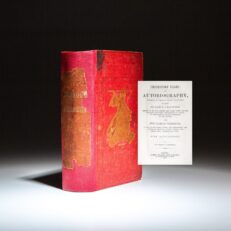 You're viewing: Threescore Years: An Autobiography $850.00
Add to cart