First English Edition of Travels through the United States of America by John Melish, published in London in 1818.

This scarce work was first published in Philadelphia in 1812. It includes two fold-out maps of the states of Kentucky and Ohio, single-page illustrations of Niagara Falls and Lake George, and single-page maps of Pittsburg, Falls of Ohio, Zanesville, and Niagara Falls, NY. Known as “One of the most accurate and faithful records [of America] written in the first part of the nineteenth century” (Clark, Travels in the Old South, II:159). Melish’s travels took him into most of the American states, but his accounts of Pennsylvania, Ohio, and the Ohio River country are the most detailed. This work was an important guide for early Irish immigrants to the United States. 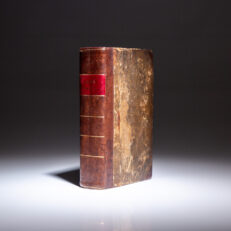