After regaining his freedom from slavery in January 1853, Solomon Northup soon wrote this account of his ordeal with the assistance of his editor, David Wilson. The book was advertised for prepublication orders at a price of $1.00, and by the time of its release in July 1853, the book was an immediate bestseller. The publisher increased production with the “Fifth Thousand” printing, “Eighth Thousand” printing and so forth. By early December 1853, the Anti-Slavery Bugle announced that 17,000 copies had sold in four months, and the publisher was looking for 1,000 agents to sell the book in the United States and Canada. With the book’s success, Northup traveled the Northeast giving lectures about his experiences.Emeline J. Odekirk (also spelled Oderkirk) was born in Hoosick, New York in 1816. By the late 1840s, she was living in Washington County, New York, working as a dressmaker. From 1858 to her death in 1882, she lived in West Troy, New York. 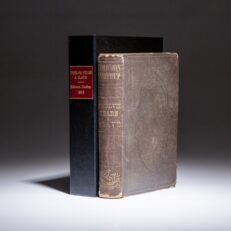