First edition of Twenty-Five Years 1892-1916, by Viscount Grey of Fallodon.

“The lamps are going out all over Europe; we shall not see them lit again in our life-time.” – (Grey, Twenty-Five Years, vol. II, pg. 20). Sir Edward Grey, First Viscount Grey of Fallodon (1862-1933) was a British statesman and the Secretary of State for Foreign Affairs from 1905-1916, the longest serving foreign secretary in British history. Quotes from his memoir would later be used by historians as an allegory for the WWI era, including Winston Churchill, who referenced the tenure of Grey at the onset of World War II. 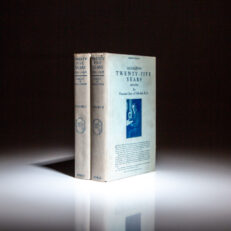