The White House Christmas Card from 1953, with a reproduction of President Dwight D. Eisenhower’s portrait of Abraham Lincoln.

Framed with white cloth matte, decorative gold frame, presidential seal beneath the portrait. The full piece measures 14″ x 18″, with hanger on back panel. Details about the print are affixed to the matte, along with a printed signature of Eisenhower. Not examined outside of frame. Written on the back is a statement of provenance: “Property of Bryce L. Harlow,” the son of Bryce N. Harlow.

This portrait of Lincoln was painted by President Dwight D. Eisenhower while waiting for news of a Korean Armistice. At the behest of Joyce C. Hall, the CEO of Hallmark, the White House Christmas cards during the Eisenhower era featured works by President Eisenhower. This portrait of Lincoln was the first such gift for staff and members of the administration, with 1,100 ordered from Hallmark and 516 being distributed to White House staff members. (Seeley, page 70)

This copy came from Bryce N. Harlow (1916 – 1987), who began his career in the executive branch serving as an administrative assistant, head speechwriter and deputy assistant for congressional affairs in the Eisenhower Administration. During the campaign of 1960, he was a speechwriter for Vice President Nixon’s unsuccessful presidential campaign. With Nixon’s election In 1968, Harlow was the first presidential appointment of the new administration, serving as a congressional liaison. Harlow was awarded the Presidential Medal of Freedom in 1981 by President Ronald Reagan. He died in 1987. 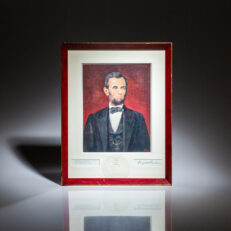