Limited edition of The White House Years: Mandate for Change and Waging Peace by President Dwight D. Eisenhower, both volumes inscribed to his Secretary of Commerce, Sinclair Weeks.

Octavo, [two volumes], xviii, [2], 650pp; xxiii, [1], 741pp. Olive cloth, title printed on spines. Both volumes with illustrated endpapers, both with uncut leaves, some unopened. Both lacking the publisher’s slipcase. A small number of the limited edition bindings were held for the personal use of President Eisenhower, without the signed and numbered limitation page.

Mandate for Change is inscribed on the half-title: “For – Sinclair Weeks, with the warm regard of his friend / Dwight D. Eisenhower / 1963.” Waging Peace is signed on an Eisenhower Gettysburg Farm bookplate: “Devotedly, Dwight D. Eisenhower.” A scarce presentation set, to a Cabinet member of the Eisenhower administration.

Sinclair Weeks (1893-1972) served as a United States Senator from Massachusetts, then United States Secretary of Commerce during the Eisenhower administration. His signature accomplishment was the funding and implementation of the Interstate Highway System of 1956, which would transform the transportation infrastructure of the United States. His contributions are mentioned at various points in Mandate for Change, with Eisenhower giving due credit for his work on the project. 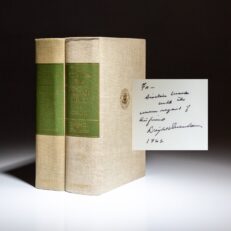