Vice Admiral Ross T. McIntire (1889-1959) served as Physician to the President from 1932-1946. While serving in this presidential post, he became Surgeon General of the United States Navy in 1938. Upon the death of President Roosevelt at Warm Springs, he accompanied Mrs. Roosevelt to Georgia to recover his body. He remained at his post until 1946, when he resigned and moved onto other government service positions. McIntire was buried in Arlington National Cemetery following his death in 1959. 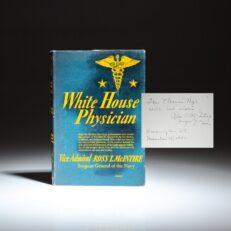