Inscribed White House Staff Photograph for the outgoing Counselor to the President, Bryce Harlow, signed by 70+ members of the Nixon administration. Bryce Harlow resigned his position in the Nixon Administration to return to his former post as Director of Governmental Relations for Procter & Gamble Company. His resignation led to speculation that he would be named Chairman of the GOP, a post that was later awarded to future president George H.W. Bush.

Bryce N. Harlow (1916 – 1987) began his career in the executive branch serving as an administrative assistant, head speechwriter and deputy assistant for congressional affairs in the Eisenhower Administration. In 1960, he was a speechwriter for Vice President Nixon’s unsuccessful presidential campaign. With Nixon’s election In 1968, Harlow was one of the first presidential appointments of the new administration, serving as a congressional liaison and later Counselor to the President. Harlow was awarded the Presidential Medal of Freedom in 1981 by President Ronald Reagan. He died in 1987. 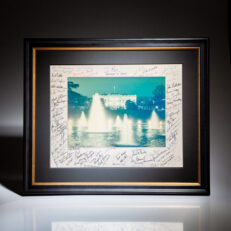