Letter to Student about the Presidency

× Ask a Question re: Letter to Student about the Presidency
SKU: 11262 Categories: Jimmy Carter, Signed Photographs

Signed letter to Bill Norton, a student from Woodlawn, Illinois, who wrote to President Carter with a variety of questions about his life as President of the United States.

On Carter Center letterhead, dated June 8, 2011, measures 8.5″ x 11″. Includes signed photograph to the same student. President Carter comments on his time spent at Camp David as “some of my best memories of my term in the White House.” On the more difficult part of the presidency, he references the time he banned US athletes from competing in the Moscow Olympics, but says “it was the right thing to do, because the Soviets had invaded and were occupying Afghanistan.” His final reference relates to Julia Coleman, the school superintendent in Plains, GA when he was a boy. Carter used one of her famous quotes in his inaugural address and recounts it here: “We must adjust to changing times and still hold to unchanging principles.” Exceptional content. 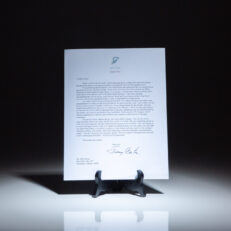 You're viewing: Letter to Student about the Presidency $1,250.00
Add to cart