First edition of Who Goes Home by Maurice Edelman, inscribed to Mrs. Lauren Bacall. Small octavo, 287pp. Blue cloth boards, silver title over spine. Stated “First Edition” on copyright page. Dust jacket in very good condition, retail price of $3.50 on front flap, closed tear to front panel, otherwise with bright illustrations and vibrant colors. Inscribed by the author to Mrs. Lauren Bacall on front free endpaper: “To Lauren Bacall – Herself – Maurice Edelman. October, 1953.” The author of this book was a member of the British Labour Party and served in the House of Commons for 30 years.

Comments: The authors other works include: A Trial of Love (1951), Who Goes Home? (1953), A Dream of Treason (1954), The Happy Ones (1957), A Call on Kuprim (1959), The Minister (1961), The Fratricides (1963), The Prime Minister’s Daughter (1964), All on a Summer’s Night (1969), Disraeli In Love (1972) and Disraeli Rising (1975). Mrs. Lauren Bacall was an Academy Award Nominated Actress, staring along side notable actors such as Humphrey Bogart, Marilyn Monroe and Betty Grable. She was also known as a democratic political supporter, with close ties to the Kennedy family and President Harry Truman. She passed away in 2014 in New York City. Provenance: from The Lauren Bacall Collection at Bonhams, May 2015. 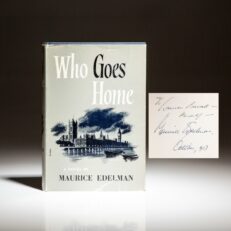