Signed by Senator Barry Goldwater, first edition, first printing of Why Not Victory? A Fresh Look at American Foreign Policy.

Barry Goldwater (1909-1998) was a five-term senator from the State of Arizona. He was the Republican nominee for President in 1964. Although he lost to Lyndon Johnson, Goldwater is credited with launching the modern conservative movement. 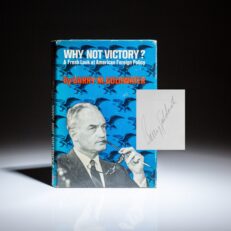