Twelvemo, 29pp, [3]. Measures 7″ x 6″. Full leather, title in gilt on cover, illustrations in gilt and green. Covers soiled from handling. Some separation at the hinge at title page. Text block is stable, but delicate. Housed in custom green cloth clamshell, title on cover over red morocco label. Signed by Secretary of State and eulogist, John Hay on the front free endpaper.

When President McKinley’s Vice President, Garret Hobart, died in November of 1899, Secretary of State John Hay become the next in line if anything were to happen to William McKinley. At the 1900 Republican Convention, Hay believed he had a chance to become the next Vice President, but the convention chose Roosevelt. Hay continued on as Secretary of State and was with McKinley the following September in Buffalo when McKinley was assassinated. John Hay had now stood at the side of three slain presidents, Lincoln, Garfield and McKinley. 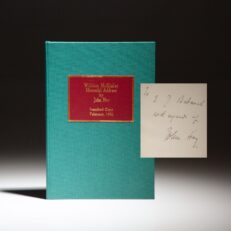