The recipient of this book, Colonel Truman Smith, helped Speidel translate his first book, Invasion 1944: Rommel and the Normandy Campaign. Smith served as an army intelligence officer, focused on Germany in the 1920s and 1930s. He served as a US Army military attache in Berlin from 1935-1939, returning to Washington as a special advisor to General George C. Marshall. General Hans Speidel was a German general and influential politician in post-World War II Western Germany. During the war he was Field Marshal Erwin Rommel’s chief of staff. He participated in the notorious July 20th assassination plot against Hitler, being the only major member of the plot to survive the war. After the war he was influential in the development of the Bundeswehr (Federal Defense Forces) of Germany. He was instrumental in Western Germany joining NATO in the 1950s. Speidel died in 1984. 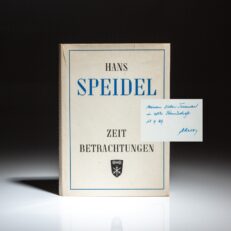 You're viewing: Zeitbetrachtungen $675.00
Add to cart