As the popularity of collecting signed, first editions continues to grow, collectors may be missing an opportunity to add value and rarity to their book collection – Uncorrected Proofs and Advance Reading Copies (ARCs).

In recent years, more and more collectors have started to focus on adding proofs and ARCs of favorite books to their collections. When you can find them these books, they are reasonably affordable. But as awareness and interest in these scarce editions increases, so will prices.

Traditionally, book collectors have gravitated toward collecting the earliest possible edition, or “state” (version) of a book. First editions have always been considered the earliest and most important version of a particular book.

In the early days of book production, this bias had a practical basis. Because books were produced using lead type, the quality of the printing diminished as the number of books were printed. The first edition of books also included typos or other errors that were “fixed” with subsequent printings. Also, first editions, typically, have smaller print runs, thus limiting the total number available to collectors.

Today, the idea of collecting the earliest possible edition remains important to collectors – which is why Uncorrected Proof and Advance Reading Copies have become increasingly popular.

So what exactly is an Uncorrected Proof or an Advance Reading Copy? 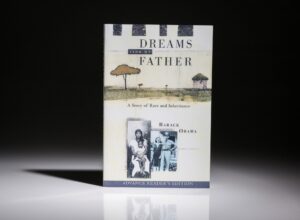 Before a book is released to the public, publishers often issue advance editions to reviewers to help with publicity and to booksellers to encourage them to stock the book. The production value of most of these soft cover books is usually quite high, often on a par with modern paperbacks.

The terms “Uncorrected Proof” and “Advance Reading Copy” are often used interchangeably. Sometimes a publisher will only issue an Uncorrected Proof, while others may only issue an Advance Reading Copy. Some publishers will issue both. Other publishers have been known to issue a “Galley”, an “Uncorrected Advance Reading Proof” or an “Advance Uncorrected Manuscript” of a particular book. It is important to note these books are different from a Review Copy that is sometimes sent in advance to book reviewers and critics to generate publicity for a particular book. These books are typically first editions of a book, often with nothing more than information from the publisher laid into the book.

It has been my experience, that when there are multiple pre-first edition publications, the earliest versions are usually Galleys or Manuscripts. Typically there are very few of these produced, as they are intended to be reviewed by the author and editors for content and typos. The next edition in this sequence is the Uncorrected Proof. The final version is the Advance Reading Copy. According to a representative from a major national publisher, when multiple versions are produced, the Uncorrected Proofs are typically given to reviewers, while Advance Reading Copies are sent to booksellers.

Galleys and Uncorrected Proofs tend to have plain covers, while Advance Reading Copies of the same title will often have a more decorative cover, often featuring early versions of the dust jacket art. Some will even include “dummies” of the dust jacket.

Publishers are careful not to release the actual number of proofs and ARCs they produce, though it is commonly accepted that the numbers are quite small. In some cases, there may only be one or two dozen books produced. For books of a better production quality or importance the total runs are likely higher.

In an article titled Collecting Uncorrected Proofs, antiquarian bookseller Ken Lopez estimates the average number of proofs produced is around “200 copies”. I believe this is a reasonable estimate, if not a bit high, because the available supply of proofs, ARCs and galleys all but disappear from the market within just a few weeks of a books publication. 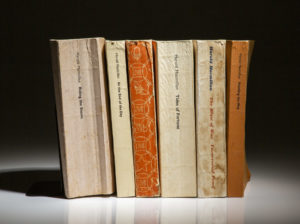 Because these books represent earlier versions of a book than the traditional first edition, and because there are so few produced, it is little wonder proofs, ARCs and galleys are becoming increasingly popular with collectors.

Condition is always an important consideration and these books can present a particular challenge for collectors. It is important to remember that because these books are for specific purposes – pre-publication review and to generate publicity/interest – they not always found in the very best condition, many may have “flaws” that would normally cause collectors to think otherwise before adding a book to their collection. These “flaws” include labels placed on the cover, containing publication and/or publicity information. Some books have other marks or corrections made by publishers on the cover or on the inside of the book.

Because these marks and labels are often placed on the book by the publisher and relate directly to the publication of the book, collectors shouldn’t worry about these small imperfections. The scarcity of these books should trump any concerns about minor condition issues. Often these “flaws” add interest and additional information about the book.

Surprisingly, despite the limited number of these early editions, the cost to acquire these books is still quite reasonable, often only around twenty to thirty dollars, sometimes less. To be fair, not every proof or advance reading copy of a book is going to be collectible. But as a general rule, if there is demand for the first edition – the earlier versions of a book will be collectible – and in some cases worth as much if not more than a first edition of the same book.

Skeptical? Consider the uncorrected proofs from the popular Harry Potter series. These books regularly sell for thousands of dollars unsigned!  Just imagine if you can get them signed!

Over the past few years, I have actively collected copies of these rare, early editions, signed or unsigned, and they are not easy to find. One of the earliest presidential proof I have in my personal collection is Franklin Roosevelt’s Looking Forward – unfortunately it is not signed (but with only 130 books ever produced, I am still glad to have it!). 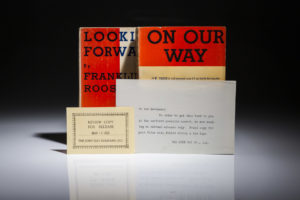 Authors are sometimes reluctant to sign these early editions of their books. There are a number of reasons for this, such as, important corrections that need to be made to the content before a book is published or a concern that circulation of the advance edition may hurt sales of the book. This reluctance, along with the lack of awareness of proofs and ARCs, adds an additional rarity to signed copies of these editions.

Limited knowledge about these books and their relatively low cost represent a great opportunity for someone just getting started in building collection of their favorite books, as well as seasoned collectors interested in building as complete a collection as possible of a particular author’s work. But this opportunity is not likely to last for long.

In his article Collecting Uncorrected Proofs, Ken Lopez concludes “Proof copies, if you follow your nose and are willing to take small risks, can be great investments — because even if the author doesn’t “hit” and the monetary values don’t go sky-high, you’ve still got a scarce, unusual, often textually significant version of the author’s work, and thus your collection is that much more special, that much less run-of-the-mill, and that much more complete.”

Whether signed or unsigned, the collecting of the early editions of books warrants the attention of serious book collectors. Regardless of your particular interest, collectors may be missing a great opportunity to add value and rarity to their collection.

Determining the value of a rare book is dependent upon multiple factors. Below we’ve compiled a list of just a few of the factors that help determine the value in a rare book.

Booksellers determine the condition of rare books by using a condition scale.

To understand why a books edition is essential, it’s first more important to understand what classifies something as first, second, third, etc. edition. An edition includes all the copies of a book that are printed from the same plates or setting of type. For some publishers, they make it easy by printing “First Edition” or “First Printing” right in the book. Other publishers are a little more cryptic. In some cases, determining the edition may come down to the misspelling of a word on page 124, the placement of words on a dust jacket or the color of the ink on a copyright page. It’s also important to keep in mind that in some rare cases, third or fourth editions can be just as valuable as first editions.

Determining a first edition can be difficult and if you need help, fell free to reach out to our professionals.

Rare book collecting hinges heavily on supply and demand. It’s simple, the rarer the book, the more demand there should be for that book. The higher demand for the book should in return increase the value of that book and vice versa.

Determine the Price of Your Rare Book

If you own a signed book, first edition, or a rare edition book and are curious about its value contact the antiquarian professionals at The First Edition Rare Books, LLC. Books are more than just our hobby – it’s our passion. The First Edition’s catalog is filled with books by Presidents, Prime Ministers, military Generals, First Ladies, and important first editions from across the world. Whether you’re looking to buy, sell, or consign we would like to hear from you. 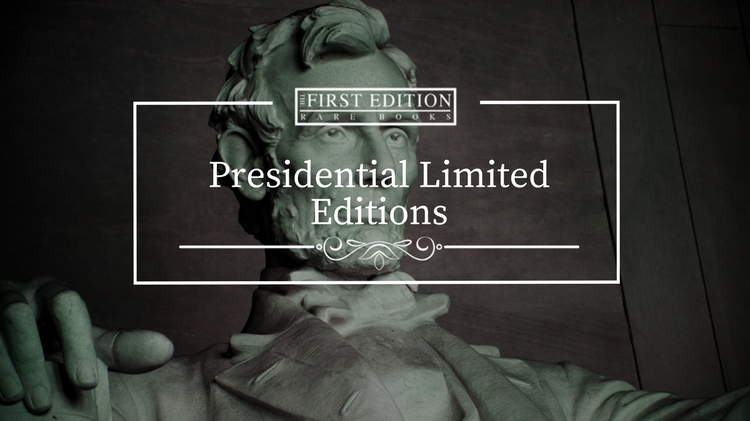 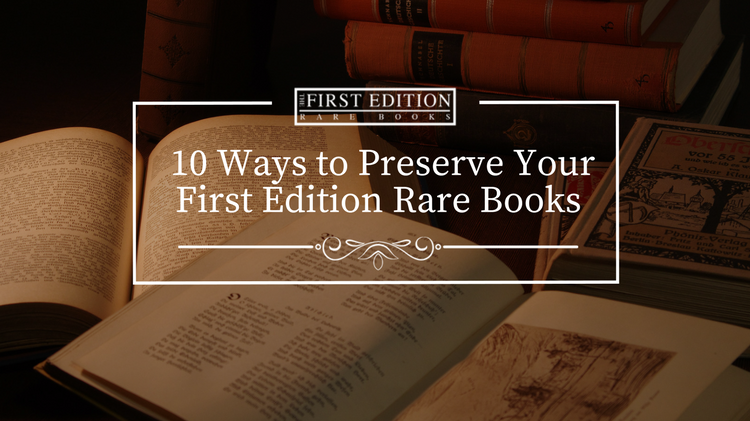 When it comes to rare and antiquarian books, they should receive the utmost care. Making sure that rare books remain in the best condition is critical for a couple of reasons. First and foremost is because some rare books are a piece of history. Such a piece of history should remain in the best condition possible. Secondly, if you’re in the bookselling, buying, or trading business, they retain more value the better the condition. Not all the time, but generally speaking the better the condition, the more money the book is going to be worth, but, that shouldn’t come as a surprise. So, what are some the best practices in caring and handling your books? Check out our list below.

In some respects, a book just isn’t a book; it’s a piece of history – a piece of art. Treating rare books with respect and handling them properly is essential for their longevity.