A Man for All People: Hubert H. Humphrey

A Man for All People by Ralph G. Martin, inscribed by Vice President Hubert Humphrey and Adlai Stevenson.

Hubert Humphrey served as Vice President for Lyndon Johnson from 1965 until 1969. He was the Democratic nominee in the contentious 1968 presidential election, after President Johnson decided not to run and Robert F. Kennedy was killed in Los Angeles. He supported Johnson’s war stance, which was unpopular with Democratic voters. He lost to former Vice President Richard Nixon and would return to the Senate in 1971. 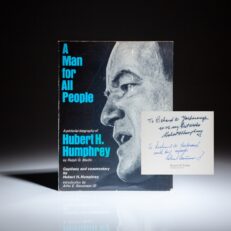