A Prophet in His Own Country

× Ask a Question re: A Prophet in His Own Country
SKU: 11207 Categories: New Inventory, Presidential Candidates

Mr. Stevenson was Governor of Illinois from 1949-1953. He was the Democratic candidate for President in 1952 and 1956, losing both times to President Dwight Eisenhower. He finished his career as the United States Ambassador to the United Nations under President John F. Kennedy. 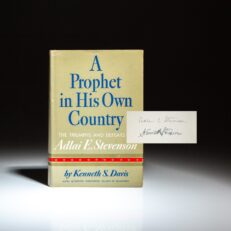