Fleet Admiral William F. Halsey (1882-1959) was an American Navy admiral during World War II, becoming commander of the South Pacific Area. He oversaw allied forces during the Battle for Guadalcanal and the Solomon Islands. After promotion to the command of the Third Fleet, he took part in the Battle for Leyte Gulf, which was the largest naval battle of the Second World War and, by some accounts, the largest naval battle in history. He retired in 1947 and was buried at Arlington National Cemetery in 1959. 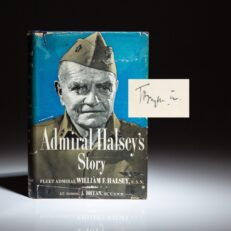