Octavo, x, 550pp. Brown leather, title in gilt on spine, decorative gilt design on both covers. All edges gilt, silk endpapers. Includes paperwork from The Easton Press. An unread copy. From a limited edition of 1,300 copies, this being number 437, all signed by Andrew Young.

Andrew Young (b. 1932) represented Georgia’s 5th Congressional District in Congress, served as President Jimmy Carter’s Ambassador to the United Nations and served as the 55th Mayor of Atlanta. He began his career as a pastor in Alabama and eventually became associated with the Southern Christian Leadership Conference. He was a colleague and friend to Martin Luther King, Jr., helping to strategize the Civil Rights Campaigns across the South. He would become the first African American Ambassador to the United Nations, then Mayor of Atlanta. 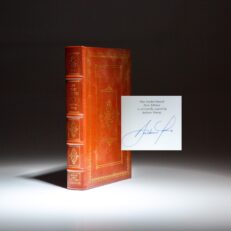