First edition of Armadale, in two volumes, by Wilkie Collins, published by Smith, Elder and Co. of London in 1866.

This work was first serialized in The Cornhill Magazine, from November 1864 – June 1866. The first publication of Armadale in book form appeared in June, 1866 and was followed by a second and third edition the same year. The first American edition appeared in 1866, published by Harper & Brothers of New York. 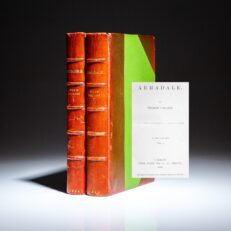