The Life And Adventures Of Nicholas Nickleby

First Edition of The Life and Adventures of Nicholas Nickleby by Charles Dickens, with two mounted envelopes with signatures of the author to close associates.

Octavo, xvi, 624pp, [1]. Marbled boards, three quarter green leather, title in gilt on spine, five raised bands with gilt-ruled compartments. Marbled endpapers, top edge gilt. A complete example, with 39 full-page illustrations by “Phiz” [Hablot Knight Browne]. Illustrations generally clean, some foxing to frontispiece, light toning and transference at various points. Mixed issue, with the “Chapman & Hall” imprint on frontispiece and 3 of the first 4 plates. (Gimbel A41). Two signed mailing envelopes affixed to front flyleaves, both signed by Charles Dickens. The first envelope is addressed to his brother-in-law, Henry Austin at the General Board of Health on Parliament Street. The second is addressed to H. Cholmondeley-Pennell, a British naturalist and poet, at the Conservative Club in London.

Henry Austin was the brother-in-law of Charles Dickens and a close friend. Dickens was a lifelong advocate for the health of nations, so he worked closely with Austin to understand the sanitary conditions of major cities of England. Austin became the Secretary to the General Board of Health in 1848, giving Dickens access to important details of health policy. 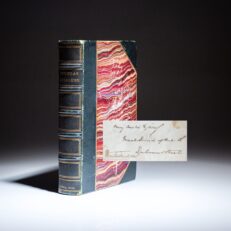 You're viewing: The Life And Adventures Of Nicholas Nickleby $3,500.00
Add to cart