Inscribed by the author on the front free endpaper “4-11-43 NYC / To whoever wins this Book – I hope you find enough fighting in here to at least prove to Hitler that we aint no nation of sissies. Woody Guthrie.”

Woody Guthrie (1912-1967) released his autobiography Bound for Glory at the age of 31, three years after his most famous song, “This Land is Your Land” debuted. Guthrie’s inscription, explicitly referencing Hitler, reinforces his anti-fascist politics and songwriting throughout the war period. He was part of the folk-protest group The Almanac Singers, which kept utopian ideals and supported the working-class man. In June 1943, Guthrie joined the U.S. Merchant Marine and wrote songs in support of sailors and unions but was moved into the U.S. Army in 1945 due to his (unofficial, but highly suspected) affiliation with the Communist Party. 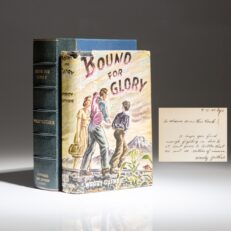