One Heartbeat Away: Presidential Disability and Succession

Typed preface by former President Dwight D. Eisenhower for One Heartbeat Away: Presidential Disability and Succession by Senator Birch Bayh. Preface is signed by Eisenhower, with handwritten notes by the editor. Includes copy of the book.

“…because this possible peril existed, Vice President Nixon and I, in consultation with the Attorney General, prior to my 1956 operation, reduced to memorandum form our understanding as to what would be the Vice President’s role in the event of a Presidential disability.” – former President Dwight D. Eisenhower. The Twenty-fifth Amendment to the United States Constitution clarifies the presidential line of succession and eliminates ambiguity about the role of the Vice President. As President Eisenhower noted in his preface, his signed agreement with Vice President Nixon did not have the legal authority to make Nixon the president if Eisenhower had become incapacitated during his surgeries. The death of President Kennedy brought new focus on the presidential line of succession, with legislation for the Twenty-fifth Amendment proposed by Senator Bayh in 1965 and ratified by the states in 1967. 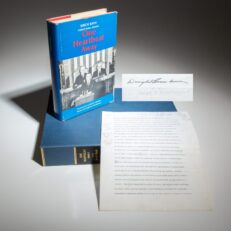 You're viewing: One Heartbeat Away: Presidential Disability and Succession $2,800.00
Add to cart