Octavo, 383pp. Green cloth, title stamped in gilt on spine. No additional printings on copyright page. Rubbing to cloth on the spine, solid text block. In the publisher’s first state dust jacket, retail price on front flap, toning and wear to spine, short closed tear on back panel, a near fine example. Signed on the front free endpaper: “For Sir Eric Miéville / from / Mary R / Xmas 1951.”

Sir Eric Charles Miéville (1896-1971) served as Assistant Private Secretary to King George VI, remaining in the position until 1945. At the request of Lord Mountbatten in the spring of 1947, Miéville accompanied General Ismay to India to serve as Mountbatten’s private secretary, assisting with the preparations for the Partition of India. Queen Mary of Teck was the wife of King George V and queen consort of the United Kingdom and the British Dominions until 1936. She was the mother of King Edward VIII, King George VI and the grandmother of Queen Elizabeth II. 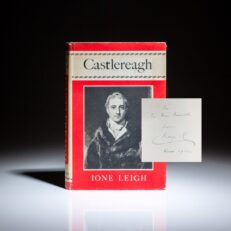