First edition of Catching and Power Hitting by Johnny Bench, inscribed to Sparky Anderson, Hall of Fame manager of the Cincinnati Reds and Detroit Tigers.

Octavo, [8], 120pp. Red hardcover, black cloth spine, title stamped in gilt. First edition statement on copyright page. Light toning to top edge of boards, light toning to leaves, a near fine example. In the publisher’s dust jacket, retail price on the front flap, short closed tear to rear panel, faint shelf wear, a very good example. Inscribed on the front free endpaper: “To Spark, Thanks For Helping Me Be What I Am Today. Johnny.” An exceptional association copy between two members of the Baseball Hall of Fame and legends of the Big Red Machine.

Sparky Anderson (1934-2010) was the manager of the Cincinnati Reds from 1969-1978. He brought together a team which became known as the Big Red Machine, winning the World Series in 1975 and 1976. Anderson moved on to the Detroit Tigers in 1979, where he won another World Series in 1984. The author of this book, Johnny Bench, was critical to the success of the Big Red Machine. He played catcher for the Cincinnati Reds from 1967-1983. Bench was a fourteen-time All-Star and two-time National League MVP. He was inducted into the Baseball Hall of Fame in 1989. 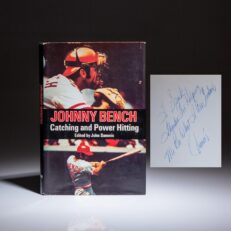