Jean Kennedy Smith was the youngest daughter of Joe and Rose Kennedy and the sister of President John F. Kennedy, Robert Kennedy and Ted Kennedy. She was the Ambassador to Ireland, where she was instrumental in the Northern Ireland peace process during the Clinton administration. She founded the organization, Very Special Arts, which allows people with disabilities to engage in the arts. She was the last sibling of President John F. Kennedy to die when she passed away in 2020. 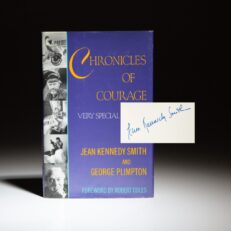