From the 1960 Richard Nixon Presidential Campaign, a commemorative set of pens for the head speechwriter, Bryce N. Harlow.

Brass dedication plaque on black marble base. Chip to one of the pens along the barrel. Pens were manufactured by the Sheaffer Pen Company of Fort Madison, Iowa, the preferred pen manufacturer for Nixon documents. Dedication plaque reads: “Bryce Harlow / With Grateful Appreciation / For Devoted Service Beyond The Call Of Duty / In The Battle Of 1960 / Dick Nixon.” A scarce piece, with no record of other campaign gifts like this appearing on the public market.

Bryce N. Harlow (1916 – 1987) began his career in the executive branch serving as an administrative assistant, head speechwriter and deputy assistant for congressional affairs in the Eisenhower Administration. In 1960, he was a speechwriter for Vice President Nixon’s unsuccessful presidential campaign. With Nixon’s election in 1968, Harlow was one of the first presidential appointments of the new administration, serving as a congressional liaison and later Counselor to the President. Harlow was awarded the Presidential Medal of Freedom in 1981 by President Ronald Reagan. He died in 1987. 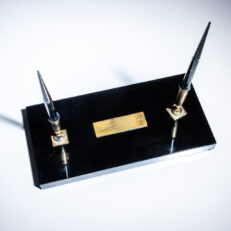 You're viewing: Commemorative Set of Pens for Bryce Harlow $475.00
Add to cart