Signed photograph of President Richard Nixon and the full Nixon family at the White House in 1969.

Framed color photograph, gold leaf frame with creme matte, measures 13″ x 10.” Impression to middle of photograph, not examined outside frame. This first family portrait was taken at the White House on June 15, 1969. Signed along the bottom of the matte by President Richard Nixon, First Lady Pat Nixon, David Eisenhower, Julie Nixon Eisenhower and Tricia Nixon. Inscribed along top edge of matte by Pat Nixon: “To Judge J. Walter Yeagley, With best wishes from our family.”

The recipient of this photograph, J. Walter Yeagley (1909-1990), served on the District of Columbia Court of Appeals from 1970-1984. Before his appointment to the Court of Appeals, he was Assistant Attorney General and director of the Internal Security Division of the Justice Department. In this position, his work focused on citizens with suspected Communist affiliations, working closely with FBI Director J. Edgar Hoover. Judge Yeagley died in 1990. 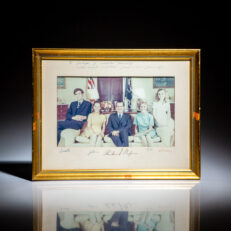 You're viewing: Signed Photograph of President Richard Nixon and Family $575.00
Add to cart