Committee on Labor and Public Welfare

Signed limited edition of the United States Senate report from The Committee on Labor and Public Welfare.

Senator Ralph Yarborough served in the Senate from 1957 until 1971. He was a Democratic Senator from Texas, with strong ties to former President Lyndon B. Johnson. He was with President Kennedy in Texas, during his November 1963 visit. He initially refused to ride with Vice President Johnson in the motorcade, forcing President Kennedy to have a “heated exchange” with Johnson, demanding that he get Yarborough in line. Johnson acquiesced, and Yarborough was in the motorcade behind President Kennedy on that fateful day. Yarborough would go on to call that day in Dallas “the most tragic day of my life.” In the 1964 senatorial election, he ran against future President George H.W. Bush, prevailing in the election and setting Bush on a path that would eventually lead him to the Presidency. He lost his seat in 1970 Lloyd Bentsen, returning to private life. 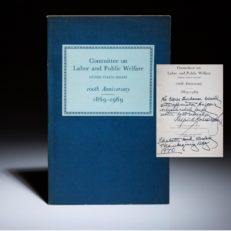 You're viewing: Committee on Labor and Public Welfare $175.00
Add to cart