Comments: Anne Morrow Lindbergh was an award winning author and pioneering aviator. She was the wife of Charles Lindbergh until his death in 1974. Her work, Gifts from the Sea (1955) was a national best seller. Her first work, North to the Orient recounted her early adventures with Charles Lindbergh. She was a ghost writer on Lindbergh’s Pulitzer prize winning autobiography, The Spirit of St. Louis, published in 1953. 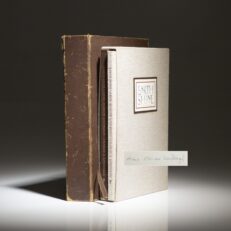