Fear God and Take Your Own Part

× Ask a Question re: Fear God and Take Your Own Part
SKU: 10503 Categories: African Exploration and Hunting, Presidents, Theodore Roosevelt

The second edition of Fear God and Take Your Own Part by Theodore Roosevelt.

Octavo, xvi, 414pp. Yellow buckram, title in dark green on spine and front cover. Statement “Printed in the United States of America” on copyright page, which does not appear in the first edition. In scarce publisher’s second edition dust jacket, lacking the $1.50 retail price on the spine, bright illustrations, some wear at hinges, printing on both sides. The publisher considered this the “cheap version,” in that it bastardized the sales of the true first edition. (Cole & Vail, A44c) A nice example.

Theodore Roosevelt served as the 26th President of the United States. He was a prolific author, writing more than 18 books during his lifetime, beginning with The Naval War of 1812 in 1882. His other notable works include The Winning of the West, African Game Trails, and The Rough Riders. 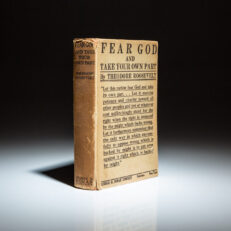