Framed letter, measures 30″ x 16″. Buckram cloth matte, museum glass, includes two color photographs and two dry flies. Framed in Bozeman Montana. The letter is thanking Mr. McIntyre for making Carter’s visit to Montana so enjoyable. While in Montana, President Carter, Amy Carter and Rosalynn Carter went fly fishing at Poindexter Slough, one of the finest spring creeks in North America. President Carter was on his way to a three-week stay in China, with this short stop in Montana for some relaxation. A fine piece.

The recipient of this letter, Mr. Richard (Rick) McIntyre, is one of the most celebrated wolf experts in America. McIntyre has spent his life working for the National Park Service, and in 1994, he arrived at Yellowstone National Park. His wolf expertise has led him to be featured on 60-Minutes and NPR. He is the author of numerous books including Denali National Park: An Island in Time (Albion, 1986), Grizzly Cub: Five Years in the Life of a Bear (Alaska Northwest, 1990), A Society of Wolves: National Parks and the Battle over the Wolf (Voyager Press, 1993, 1996) and War against the Wolf: America’s Campaign to Exterminate the Wolf (Voyager Press, 1993, 1996). 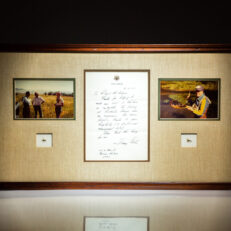