Framed and matted, museum glass, full piece measures 20″ x 14.5″. On the personal stationery of Gerald R. Ford. Includes a second handwritten letter affixed to the back of the frame, heavily faded, identical verbiage to the framed letter. Full letter reads.

“June 23, 1978 / Dear Bryce: It will be difficult to believe that the Nation’s Capital won’t have Bryce Harlow around to keep it on an even-keel. With your retirement, the Nation will be the loser. No one, during my nearly 30 years in Washington, did more than you to help others, Democrats or Republicans, Senator or Congressmen, President or others. I was the beneficiary of your friendship, your wise counsel and your loyalty. I will be forever grateful. / Betty and I have so many wonderful memories of our friendship with Betty and Bryce. Such beautiful relationships make all the heart-aches and disappointments so insignificant. We thank you both for making our lives better in so many ways. / Each of your countless friends could write a book about how much good you have done for our country. No one could write a line of criticism. You leave Washington with one of the most enviable records of thoughtful, constructive and effective action. / We do hope you will take it easy and thoroughly enjoy your well earned retirement. Betty and I will be thinking of you, praying for your good health and hoping that we can get together. If you come west the door is open – – we would love to have the Harlows spend some time with us. / We love you both. / Jerry Ford / Jerry certainly said it all – Betty Ford.”

Bryce N. Harlow (1916 – 1987) began his career in the executive branch serving as an administrative assistant, head speechwriter and deputy assistant for congressional affairs in the Eisenhower Administration. During the campaign of 1960, he was a speechwriter for Vice President Nixon’s unsuccessful presidential campaign. With Nixon’s election In 1968, Harlow was the first presidential appointment of the new administration, serving as a congressional liaison. Harlow was awarded the Presidential Medal of Freedom in 1981 by President Ronald Reagan. He died in 1987. 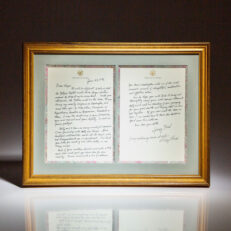