× Ask a Question re: In honor of a man and an ideal…Three Talks On Freedom
SKU: 2704 Categories: Performing Arts & Media, William Safire Collection

A radio broadcast by the Columbia Broadcasting System, honoring Edward R. Murrow, inscribed to William Safire by an antiquarian bookseller.

Twelvemo, 35pp. Original paper wraps, light pencil marks on covers, bound at spine with staples. Inscribed on the front free endpaper to Mr. Bill Safire, with a note that this copy was from the Reid Fulton collection. 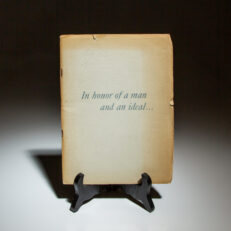 You're viewing: In honor of a man and an ideal…Three Talks On Freedom $75.00
Add to cart