Includes envelop from the White House affixed to back panel. Mr. Swasey was a mechanical engineer and founder of the Warner & Swasey Company, which built telescopes. He was a benefactor for President Taft and donated large sums to Case Western Reserve University in the 1920s. This photograph was signed shortly after the election defeat of President Taft, losing to future president Woodrow Wilson and garnering less votes than former president Theodore Roosevelt’s Bull Moose party. 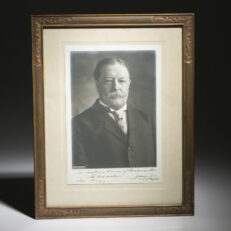 You're viewing: Inscribed Photograph as President $875.00
Add to cart